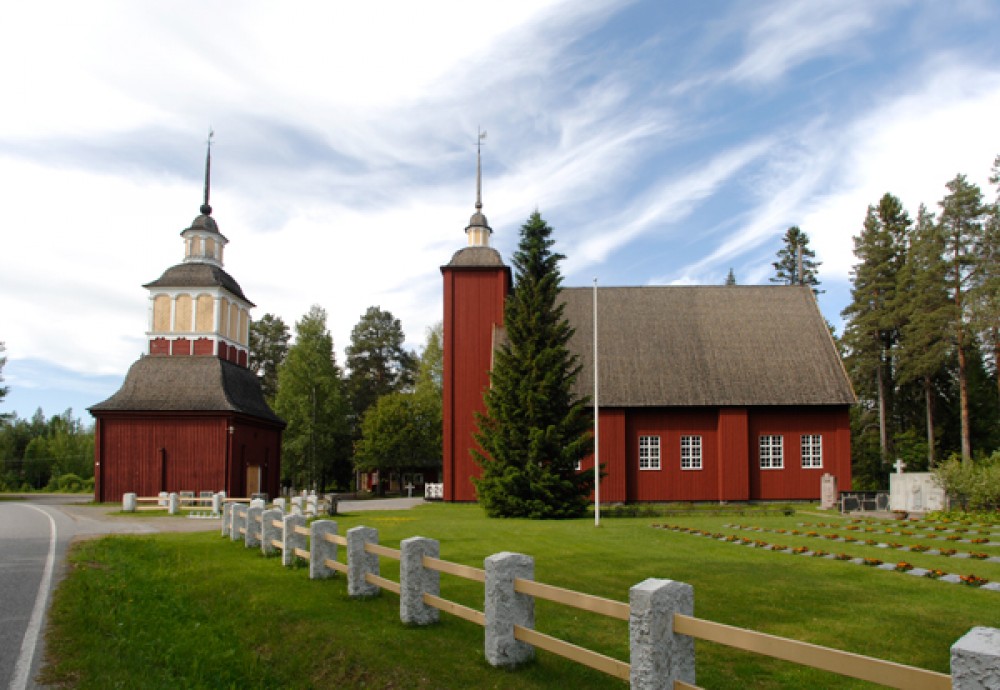 Utajärvi Church is the Evangelical Lutheran parish church in Utajärvi, located west of the municipal centre near highway 22, on the south bank of Oulujoki River. The Oulujoki River Valley was a part of Liminka from the late 15th century up until the early 17th century, when it became part of Oulu parish. It stretched from the sea to Oulujärvi Lake before one area after another split away to become independent parishes. When Muhos dependent parish was established in the 1630s, Utajärvi was part of the Muhos area until it became the Muhos chapel association at the beginning of the 1760s. Utajärvi became independent in 1886 – although not until 1899 in practice when the first minister of Utajärvi, Erik Pesonen, took up his post.

The early 1760s were a time of construction for Utajärvi parish: the church was finished in 1762, the rectory in 1763 and the belfry in 1764. We can only imagine the kind of effort required of the farmers who felled their tallest trees for the construction of these buildings. But there was no shortage of motivation; they wanted to have a church of their own. The simple worship room in Torvenniemi (nowadays Postilanniemi) from the 17th century was no longer sufficient. In connection with the visit by Bishop Mennander to Oulu Church on 10 February 1760, farmers from Särkijärvi, Juorkuna, Vuotunki, Sanginjärvi, Niska, Ahmas and Utajärvi requested permission to build a chapel in Utajärvi at their own expense. The farmers were led by Matti Roininen, whose idea it likely was to build a church and who would oversee and keep logs of the daily work. The church project really took off when the farmerms found a skilled master workman, Heikki Väänänen (also known as “Karahka Väänänen”) from the village of Karahka in the neighbouring parish of Ylikiiminki. Even before getting the official construction permit, the logs and stone required for the project had already been brought to the site.

Utajärvi Church is a block pillar church with a western steeple; one of twelve such churches in the world. Eleven of them are located in Finland and one is in Sweden, Utajärvi Church being the third youngest of the lot. There is no certain information available on the designer of the church. Nearby is a sleek belfry – a masterpiece by Heikki Väänänen (born 8 July 1724, a local of Karahka village in Ylikiiminki). Anyone looking for clean lines and the elegance of old log construction can find it in Utajärvi Church and its belfry. So take your time to take in the big picture and explore the details. You’ll find the vision of an experienced countryman; his idea of the essence of a church. The details tell a tale of skilled craftsmanship. You can still see the marks of old carving axes on the logs. 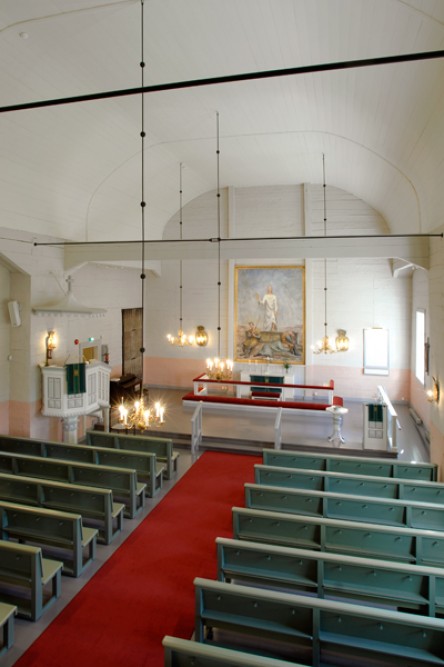 In 1894, the exterior and interior were completely altered under the direction of regional architect Julius Basilier. People wanted a more “handsome” church. Following the construction trends of that time, the church was renovated in a neo-Gothic style, obscuring the original design for nearly eighty years. During the renovation in 1970 and 1971, the interior and exterior were restored close to the original design. The church underwent interior and exterior repairs and changes in 2009. Bishop Samuel Salmi reconsecrated Utajärvi Church in connection with the episcopal visitation on 17 January 2010.

The original 1838 altar painting in Utajärvi Church depicted the resurrection of Jesus Christ. It was painted by Jakob Wallin, owner of Koistila Farm, located in the village of Laitasaari in Muhos. The original altar painting burnt when the church was redone in 1894, as it was being stored in the Siiras’ cowshed that happened to catch fire. The current altar painting in the church was painted by artist Olli Miettinen (1899–1969) in 1949, and it depicts the same motif as the original painting by Wallin. Titled Kristuksen ylösnousemus (The Resurrection of Christ), it is based on Piero della Francesca’s fresco The Resurrection, located in Sansepolcro Church in Central Italy. The church organ is from 1981, the second one in the history of the church. It is a 15-stop mechanical organ built by Urkurakentamo Tuomi in Sotkamo. Previously, a nine-stop organ was bought from the Tulenheimo workshop in Kangasala in 1928. The gilded, baroque-style hourglass base of the pulpit may be the oldest item in the church. It was received around the time of construction, gifted from the wooden church preceding Oulu Cathedral. The frame features Gothic profiled colonettes that were typical in the 18th century. Apparently, the hourglass wasn't originally part of the base. The sconces are from 1762, 1763 and 1770. The two 16-arm wood/iron chandeliers were bought in 1779 from farm owner Antti Nikkilä from Siikajoki. The six-arm traditional baroque brass chandelier was bought in 1780 from farm owner Pietari Halonen. The church also originally featured a 30-arm chandelier from 1880, memorialising the 25-year reign of Emperor Alexander II. The original pulpit, pews and fixed furnishings of the choir were redone along with the major changes in 1894.

The candlesticks were gifted by Utajärvi’s Swedish friendship municipality Vänesborg. They apparently originate from a Greek Catholic church. One single-arm brass sconce is from 1762, the year the church was built, which was when the church ledger also got its first entry for the furnishings: a wooden bier. In 1763, the church bought some red broadcloth to wrap the pulpit and cover the altar. The cloth was only removed from the list of items in 1895, which would mean that it was in use for 132 years. Other old furnishings in the church include a Finnish Bible and two Finnish hymn books, three chests, a copper baptismal font and communion pitcher, a number board, a chasuble from 1775, and a silver chalice and paten from 1778. The most historically significant piece of furniture is probably a cabinet, built by farm owner Jaakko Kukkonen from Ahmas in 1778. The church also features stocks with six holes, meant for three people. The wall rug in Utajärvi Church is called Onnenpäiviä (Happy Days), and it was designed by Laila Karttunen. The women’s farming society in Utajärvi donated a wedding rug to the church on 7 September 1958. In 2000, the church received new paraments with four different colour series. Each liturgical colour (green, red, white and purple) is featured in a frontal, two bookmarks, a chasuble, two stoles and a pall. The paraments were designed by textile designer Sirkka Kukkohovi. The weaving and needlework was done as voluntary work by skilled women, mainly Utajärvi locals.

The belfry has been maintained in its original style from the start. The older church bell in the belfry is from 1763 and it was recast in 1768. The larger, newer bell that is currently in use was bought in 1945. The drawings of the church and the belfry have not been found – if they ever even existed – but with the expertise of Professors Lars Pettersson and Esko Järventaus the parish was able to restore the church to an appearance that matches the original very closely. Naturally, there are some differences in the details, but the overall look matches the one from 1762. This simple and unpretentious temple fits a maximum of 320 worshippers. The church is open during services and events. The churchyard has a military cemetery, a local museum and an old tar boat. The municipal Utajärvi wellness route runs past the church and local museum.

The military cemetery in Utajärvi churchyard has 109 soldiers’ graves. Other cemeteries in Utajärvi have an additional ten soldiers’ graves. The area of the military cemetery and the hero statue was designed by architect Uki Heikkinen and its relief was carved by academician Oskari Jauhiainen. The statue was revealed on Sunday 20 August 1950. The hero statue was erected to honour the people fallen in the Winter War and the Continuation War. The memorial stone and cross are made of light grey granite and it has finely chiselled text with a sand-blown finish. The middle stone has a sunken relief of a warrior ¬– a soldier wearing winter camouflage on a winter’s night, keeping watch. The backing wall is cast concrete covered with black phyllite from Ylipaakkola. The memorial stone is engraved with the text:

We fought not for ourselves
we fell not for honour
we wished to defend our country
to protect the homestead Finland
we live
as Finland lives.

In Utajärvi churchyard, next to the hero statue, is a monument for the fallen left behind in Karelia. The red granite monument has a relief of an old man playing the kantele, a traditional Finnish instrument. On top of the monument is the coat of arms of Karelia. The monument was revealed in autumn 1958. The monument features the texts: “Often has the kantele hung here on the willow of sorrow” and “Erected in 1958 by the Karelians of Utajärvi in memory of the fallen left behind in Karelia”.