Säräisniemi Church is a cruciform church that was completed in 1781 with about 500 seats. The church is popular for weddings, located in a beautiful landscape in the old municipal centre of Säräisniemi in Vaala, right next to Oulujärvi Lake. The church is kept cold during the winter but heated for services when necessary. Traditionally, the church holds services on Finnish Independence Day, Christmas morning, Good Friday and the Commemoration Day of Fallen Soldiers. A few services are held at the church each summer. Next to the church are a churchyard and a military cemetery.

Construction of the wooden church began in autumn 1768 and was picked up again the next spring in 1769. According to local oral history, the builder was Jaakko Suonperä. Officials halted the construction work in summer 1769 since the people in Säräisniemi did not have the drawings approved by the governor and cathedral chapter that were required for the construction of the church. The work did not continue until 1779, and the church was finished in 1781. The newly completed building was a cruciform church with canted outside corners and rounded arch windows and doors. Part of the east end was separated with a partition wall to form a sacristy. The exterior walls had vertical boards painted with red ochre. The roof was shingled. The ridge of the roof had a small tower-shaped ridge turret. In 1839, a two-part altar painting by J. G. Hedman was bought for Säräisniemi Church with fundraised money. The top of the painting depicts Christ on the cross and the bottom is a miniature copy of Leonardo da Vinci’s The Last Supper. 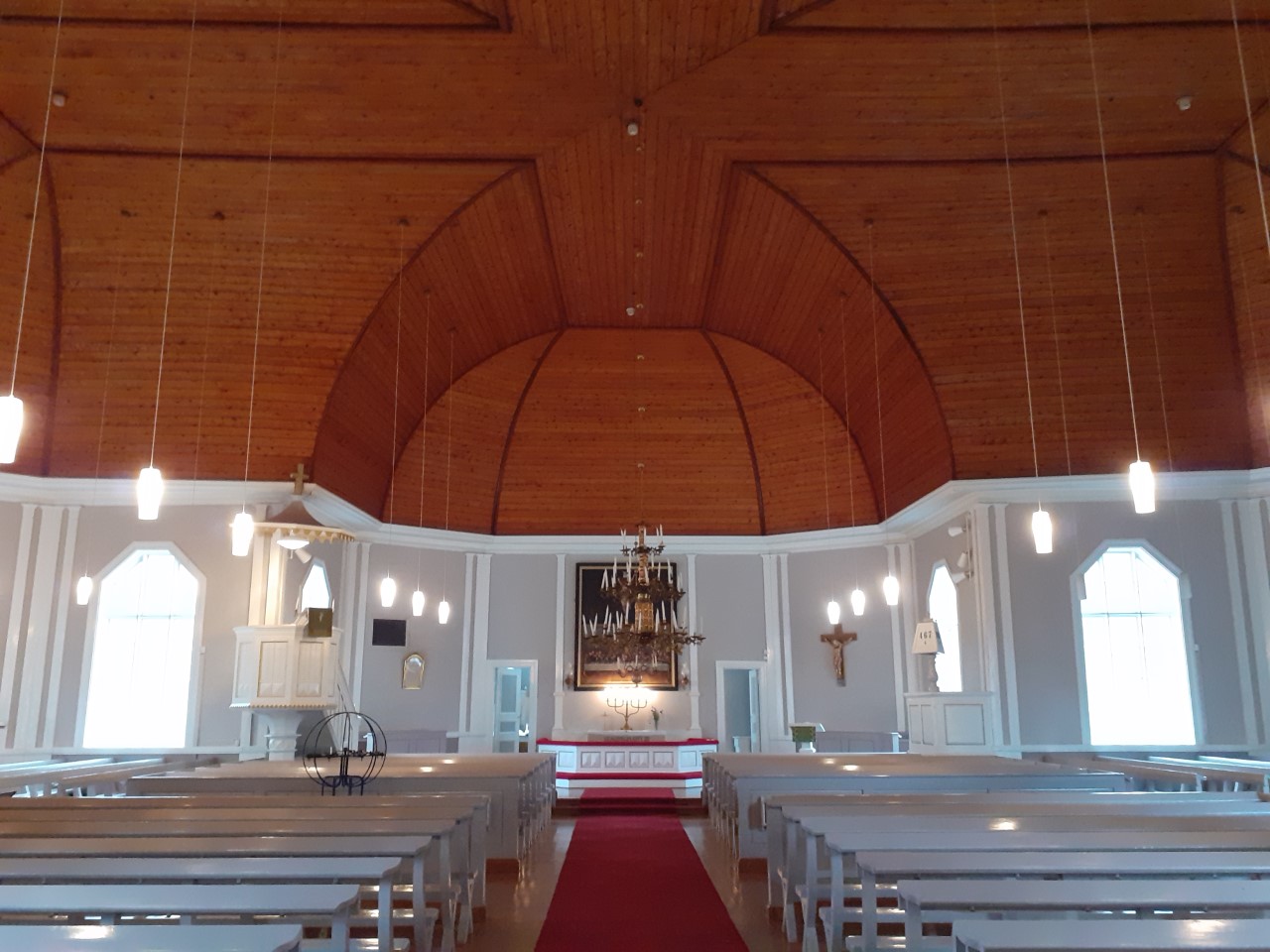 During a renovation designed by regional architect Julius Basilier and carried out between 1897 and 1898 by Samuli Tuoriniemi, this church, designed by Jaakko Suonperä, was expanded with an eastern sacristy and a porch in the west and south. The ridge turret tower was taken down. Suonperä’s folksy style was replaced by a neo-Gothic style favoured by Basilier, adapted for wooden structures. The style is especially apparent in the window and door arches and the shapes of the ends of the roof. In other respects, the pilasters and other decorations follow a general classical style. The interior walls were panelled, and the exterior walls were covered with horizontal boarding. The pedal harmonium bought from Kangasalan urkutehdas in 1929 was replaced as late as 1964 with a 34-stop Baldwin electric organ installed in the northern aisle. The current 7-voice organ was acquired second-hand in 2016. Säräisniemi Church was fitted with an oil-based air circulation heating system in winter 1959–1960.

The old shingle roof from the 1770s was considered to be in poor condition and was torn down in summer 1952. The shingles were replaced with red Eternit slates that did not match the dignity and style of a wooden church from the 1700s. As the roof started to leak after expanding and breaking due to ice and snow, the congregation made a decision in late 1977 to build a new shingle roof. In 1979, just before the 200th anniversary of the church, Taisto Ali-Tolppa from Ikaalinen along with his work crew built a new shingle roof in seven weeks using shingles produced by Eino and Hilkka Tolonen from Vaala.

Stages of the belfry

The belfry was completed in 1793 according to the design of regional master builder Jaakko Rijf (1753–1808). The belfry had a single roof like the church, but it was replaced with a metal roof in the aforementioned renovation in 1952. The older bell is from 1785 and the second one was bought in 1870. The older bell was cast by Gerhard Meyer and it features the text: “When Gustavus was King of Sweden and Mr Ridari Joh. Fredr. Carpelan the governor, Mr Jacob Hartman the bishop of the diocese and Magister Gust. Reinh. Appelgren the chaplain of the parish, was this bell bought from Säräisniemi chapel parish. Come, bow, and let us fall to our knees and lay ourselves before the Lord, our creator.” These bells were still rung in the early 20th century by treading, and the story goes that the process made the entire belfry sway.