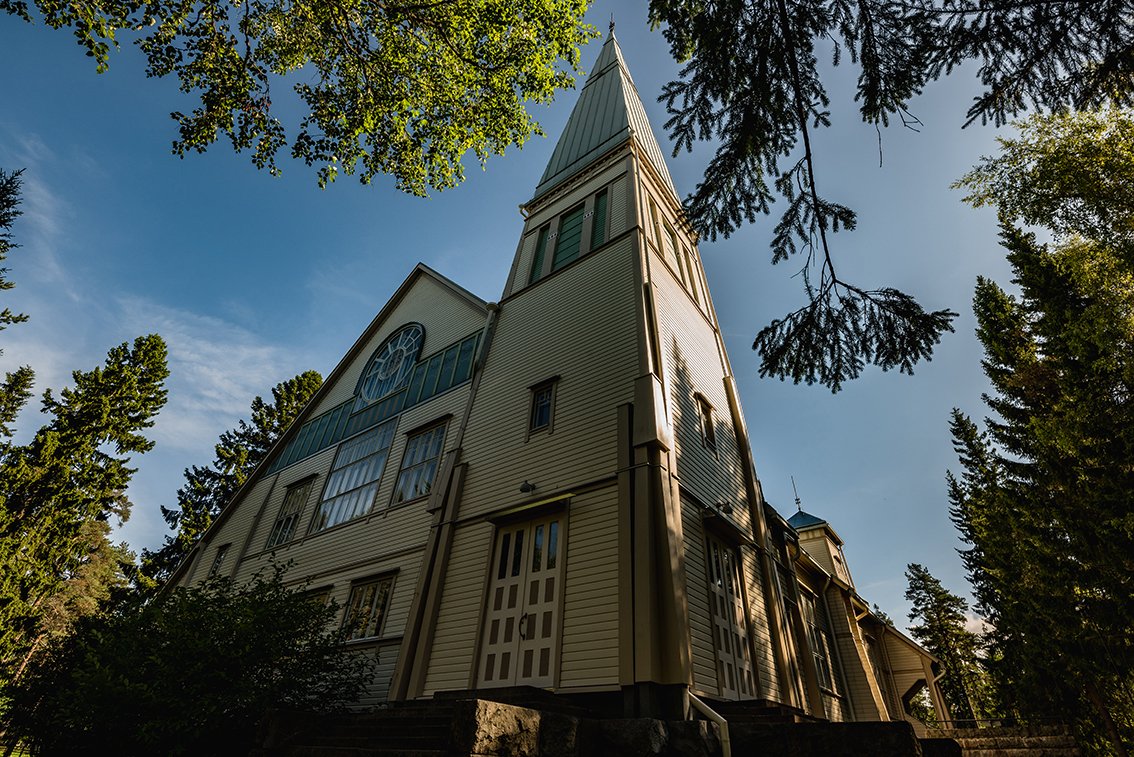 The only remaining wooden Jugend-style church in Northern Finland

Oulujoki Church is the only remaining wooden Jugend-style church in Northern Finland. It was completed in 1908. The church is located in a grove on the northern banks of Oulujoki River in Kirkkokangas district, about five kilometres from Oulu Cathedral. The church and Oulujoki parish, named after the church, are part of the Oulu Parish Union. The church is included in the Finnish Heritage Agency’s list of built cultural heritage sites of national significance. The surroundings of Oulujoki Church are protected by a town plan. The design of the church is connected to Finland’s national efforts towards independence in the early 20th century. The church was designed by Victor J. Sucksdorff, a National Romantic architect with influences from Karelian styles. In fact, Sucksdorff visited Karelia to study the local wooden architecture. It was a way of upholding Finnish identity. The design of the church was finished in 1905 and approved by the Economic Division of the Senate of Finland in 1906. Construction started in 1907 and finished the following year in 1908. Bishop Koskimies consecrated the temple as a church of the Holy Spirit on 23 August 1908.

The church is 34 metres long and 15 metres wide. The height of the roof is 20 metres, while the belfry stands 43 metres tall. The most unusual feature of the church is probably its east-facing end wall. The midpoint of the church contains the altar, pulpit, choir and organ in a beautiful arrangement. No similar layout is found in any other church in Finland. The opposite end of the church to the west has a wheel-shaped window with a cross and the letters JHS, meaning Jesus Hominum Salvator or “Jesus saviour of men”. The end wall also features the names of all of Jesus’ disciples, but Judas’ name is placed lower than the others. 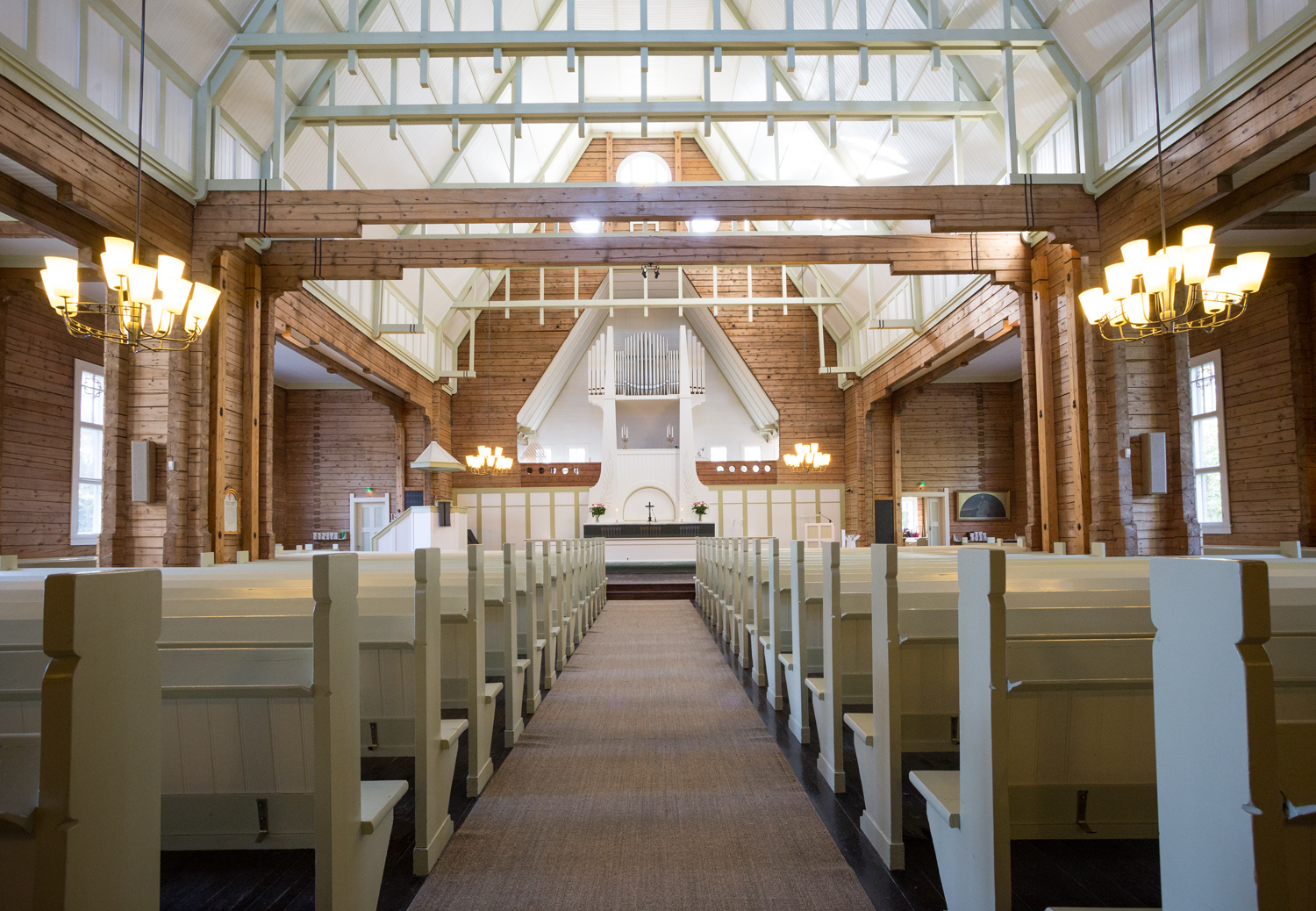 The interior of the church is characterised by exposed log walls that have not been painted or coated. Today, they have the patina of age. The dark walls are contrasted by the white altar wall and ceiling. The roof and especially the belfry reach high towards the sky. One of the bells in the belfry is marked with a sentence asking for a blessing for the Finnish people: “O Lord, bless the Finnish people”. Back in the day, the structural timber was donated by other parishes along the river and floated near the church construction site. The strong foundation of the church was made with bedrock from Oulujoki. The original decor of the church was changed several times in the 20th century, but in 1984 the church was restored to match the original look as closely as possible. The restoration was designed by architect Anna-Maija Ylimaula with support from Esko Järventaus. The main organ has 25 stops. It was built by Kangasalan urkutehdas in 1971.  During the restoration, a choir organ with six stops, restored to working order, was installed above the altar.

The only painting in the church depicts the saviour in prayer. The painting is also referred to as The Lonely Prayer (Yksinäinen rukoilija). The piece was made by Venny Soldan-Brofelt (1863–1945). Clementine Åström donated the painting to be the altar painting of the church, probably soon after the church was finished in 1908. But it was never placed over the altar, most likely due to the exceptional structure of the altar. The painting was stored for a long time in the sacristy of the church. The church uses paraments designed by textile artist Raija Rastas; the textiles delicately reflect the architectural features of the church.

Soldiers are one of the notable groups of worshippers in the history of Oulujoki Church. For decades, the temple was also used by the military unit Pohjan Prikaati, disbanded in 1998. In recent years, the church has been especially favoured for weddings in summer. The church has also been a venue for concerts. Many people find a moment of peace at Christmas at this unassuming yet romantic place of worship. During the last wars, a military cemetery was added next to the church. It was placed as close to the church as possible. The milieu of the church has not experienced any other major changes within the past century. Oulujoki Church and the surrounding park, the nearby cemetery and the riverside Oulujoki rectory are part of a protected landscape that also includes the fields in the area. These fields are still being farmed. Together, these pieces make up a very authentic early 20th century landscape that has not been altered by new construction.