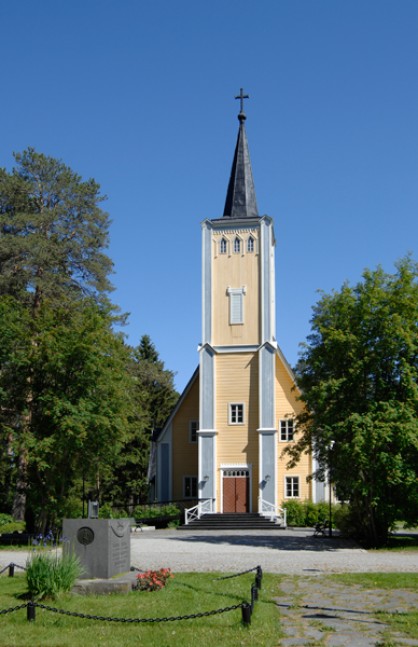 The Muhos region was part of Liminka parish before the town and parish of Oulu was established. After that, Muhos was part of the parish established in Oulu in 1606, and Muhos became a dependent parish of Oulu in 1628. After many struggles, it became an independent parish in 1766.
The current church in Muhos was finished by 1634. It is the third church in the region located in the municipal urban area alongside the Oulujoki River. According to local history, the first church was on Kirkkosaari Island and the second in Kirkkoniemi, further back from today’s church. Muhos Church is the oldest wooden church in Finland that has undergone hardly any expansions and is still in use all year round. It is a rectangular hall church, or a block pillar church, and it is thought to have been built by a tower builder called Hannu. One of the oldest pieces of furniture in the church is the pulpit, built by carpenter and sculptor Mikael Sigfridsson Balt in the late 17th century. The canopy over the pulpit holds a carving that is likely to be from the Thirty Years’ War in Germany. The carving depicts the Redeemer holding a victory banner and a globe with angels dressed in white on both sides. Underneath the canopy hangs a dove, a symbol of the Holy Spirit. During the Great Northern War (from 1714 to 1721) the Russian troops ravaged Muhos Church but did not burn it, so it was restored to working order during the years of peace that followed. The church was renovated thoroughly in 1762 under the leadership of church builder Matti Honka. During the renovations, an Ostrobothnian-style belfry was also built. It has two bells, the larger of which was cast in Stockholm in 1757 and the smaller in Helsinki in 1885.

The greatest treasures at the church are the images painted on the wooden walls between 1773 and 1775 by church painter Emanuel Granberg, born in Vihanti. During the renovation in 1839, some of the paintings were destroyed, but the walls of the sacristy and the gallery banister still have surviving paintings by Granberg. The paintings in the sacristy feature the following compositions, seen from the church hall door from left to right: Jeesus Emmauksen tiellä (Jesus on the Road to Emmaus), Jeesus Martan ja Marian kodissa (Jesus in the Home of Martha and Mary), Samuel voitelee Saulin kuninkaaksi (Samuel Anoints Saul as King), a painting of angel heads and the name ‘Jahve’ (Yahweh) in the middle, Jeesus Getsemanessa (Jesus in Gethsemane), Pietari kieltää Jeesuksen (Peter Denies Jesus), Syntinen nainen voitelee Jeesuksen jalat (Sinful Woman Anoints Jesus’ Feet), Tuhlaajapoika sikopaimenena (Prodigal Son as Swineherd), and a painting of the Good Shepherd (Hyvä paimen) over the door. The paintings on the gallery banister depict, from left to right, the prophets Ezekiel, Isaiah, Jeremiah, Hosea and Daniel. 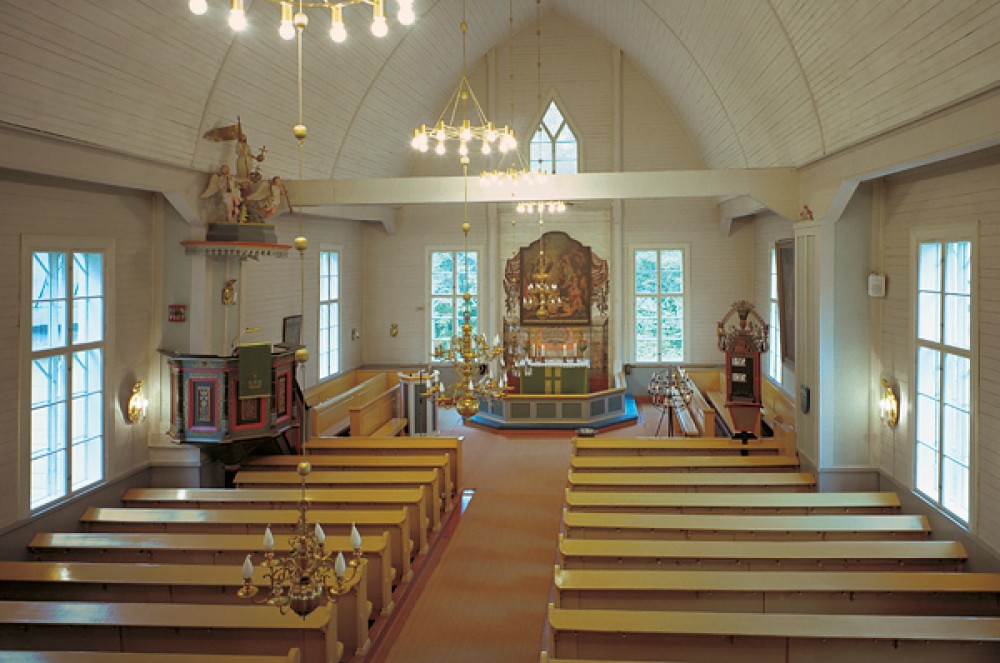 The altar painting is an oil painting on canvas titled Mooses ja vaskikäärme (Moses and the Bronze Serpent) by Emanuel Granberg in 1778. On the right-hand side of the church is a painting by Jakob Wallin in 1837 titled Ristiltäotto (Descent from the Cross). The chandeliers, brass lamps and candelabras are mostly donations from parishioners, the oldest being from around the mid-18th century. One of them is the most handsome hymn board in the diocese, made by a rural carpenter and donated by Governor Abraham Stjernschantz around 1828. The elaborate ornamental carvings depict the crucifixion and stylised human figures – the middle one is a woman wearing a crown, resembling the Virgin Mary. One of the oldest items in the church is a baptismal font made from tin in 1707. Its wooden base is from the mid-19th century, adorned with eight angel head carvings.

Between 1872 and 1873, the church underwent a renovation in the neo-Gothic style under the direction of church builder Mikko Karjalahti. The renovation involved restyling the ceiling into a shape that tapers upwards in a gothic arch. More windows were also added and existing ones were enlarged. At that time, the church tower was built in its current form, and the exterior walls of the church were boarded and painted. The most recent repairs at the church were done between 1982 and 1984 when the interior and exterior were painted with hues from the 19th century. In 1984, the church celebrated its 350th anniversary, receiving gifts that included the Muhos coat of arms, paraments and a mission candelabrum. The 23-stop organ in the church was built by Kangasalan urkutehdas in 1968. The organ was renovated and rescaled in 2019.

The first cemetery in the parish was located around the church. The churchyard features memorials and soldiers’ graves from the Finnish war of independence as well as the latest wars. Muhos military cemetery is located to the south of the church building. The churchyard has a total of three memorials: the front of the church features a monument to the people who fell in the war in 1918; the south side of the church features a memorial stone for those buried in the churchyard, donated by factory owner V. Tuomanen for the 300th anniversary of the church; and the third memorial is a hero statue for war heroes, sculpted by artist Matti Tarvainen and revealed in 1949. The military cemetery, with a total of 123 buried war heroes, was repaired to its current state in 1960 based on a design by artist Välke. Between 1998 and 1999, the churchyard area was renovated to make the church more accessible for people with reduced mobility. The design for the renovation was made by Arkkitehtitoimisto Jorma Teppo Oy. The wall of the belfry has a canopy with a pauper statue carved by Elias Vainio in 1934. The pauper is 127 cm tall. The handsome pauper was restored a decade ago.