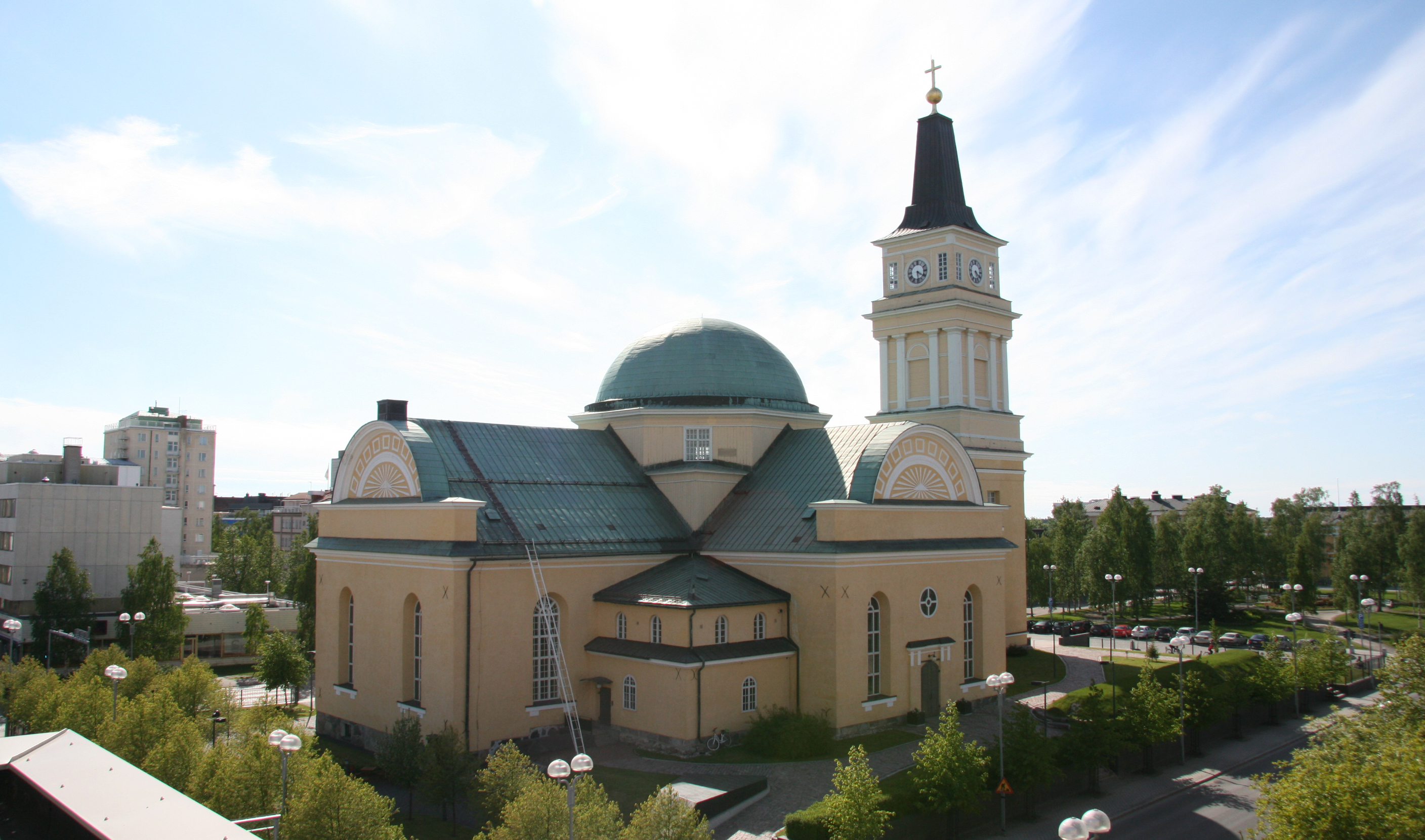 The town of Oulu got a wooden church in the 1610s. The wooden church was located where the front door of the current cathedral is, but oriented from east to west. It was expanded several times, but in due course it became too small and run down, so the church was torn down in 1769. After the wooden church, a stone church was built on the spot in 1777, eventually becoming Oulu Cathedral in 1900. The church used to be surrounded by a cemetery. It was bordered by a wooden fence with gates. The most valued and expensive burial plots were underneath the floor of the church. After running out of space, the cemetery was transferred in 1780 to what was the edge of the city at that time. It is one of the oldest cemeteries in Finland that is not directly next to a church. The old church cemetery then fell out of use, and only the war heroes of the Finnish civil war were buried there in 1918. Oulu Cemetery is located in the Intiö district, less than a kilometre from Oulu Cathedral, stretching along Kajaanintie to the south.

An essential part of the landscape

Oulu Cathedral is an essential part of the urban landscape in Oulu. The outline of the church stands out clearly in the townscape. Oulu Cathedral is the cathedral of the Diocese of Oulu and the church of the Evangelical Lutheran Church in Oulu. The current design of the church is by Carl Ludvig Engel and dates from 1832. The stone walls are remnants of the church built in 1777 whose wooden structures were destroyed in the Great Fire of Oulu in 1822. The designer and construction overseer was Daniel Hagman from Sundsvall. The church was built from natural stone and was the second largest in Finland at the time it was finished. At that time, Finland was a part of the Kingdom of Sweden, and the church was named after Crown Princess Sophia Magdalena. The church was built large enough so that all the residents in Oulu – 2,400 people – were able to fit in to attend a service.

A fire destroyed Oulu in 1822. The wooden structures of the church burned down; only the stone walls remained intact, and parishioners were also able to save the movable items. The church was rebuilt according to drawings made by architect Carl Ludvig Engel. The original stone walls made up the frame, and the church received a new central dome, roof structures and tower. The church was completed in 1832 and the tower in 1845. Other cathedrals designed by Engel include those in Helsinki and Lapua. The items and art in Oulu Cathedral span a number of centuries. Several valuable artworks and items have been acquired for Oulu Cathedral over the years, many as donations. The oldest chasubles, chandeliers and sconces are from the 18th century. Items from the 17th century include a communion goblet and two gravestones. The most recent pieces of art are related to the interior renovations done at the end of the 1990s.

Paintings in the cathedral 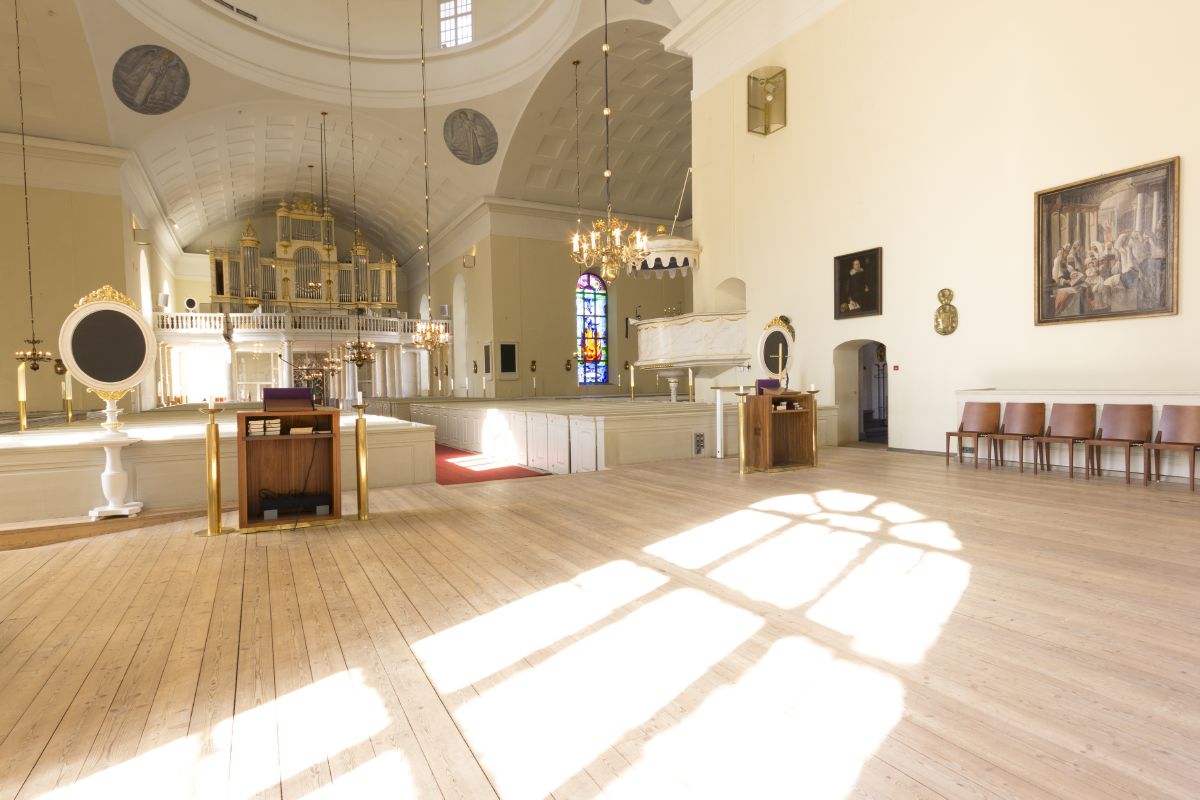 Above the door leading to the sacristy is a portrait of Johannes Messenius (1579/1580–1636), most likely painted by Cornelius Årendtz (1590–1655) in 1611. Until 2020, a painting by Carl Peter Elfström hung on the right side of the portrait. The piece was painted in 1808 and depicted Jesus Christ as a 12-year-old in a temple. In September 2020, the painting was replaced by a new piece titled Taivaanranta – Divine Horizon. It was painted by Sampo Kaikkonen (b. 1975), an artist from Oulu living in Ylikiiminki. Kaikkonen uses a centuries-old layered painting technique where the importance of light and shadow is highlighted. Together, the artworks in the choir and altar tell the story of direction and destination in a person’s life. The ends of the main aisles and the corners of the crossing dome feature frescos painted by Paavo Leinonen (1894–1964) in 1932 depicting the Prodigal Son, the Good Shepherd and angels. The older stained glass windows are from 1932, designed by Gunnar Forström (1894-1958). They depict the birth of Christ, the angels’ message to the shepherds and the kings bowing, and the Good Shepherd and Christ with children, the Holy Spirit, the Sermon on the Mount, Christ preaching on fields and at sea, Christ healing a crippled person, raising Jairus’ daughter and healing a blind person.

The stained glass artworks of the altar wall are from 1898, with no specific information on the artist, and they depict Christ on the cross and the resurrection of Christ. The newer stained glass artworks from 1977 were designed by three artists: Palava pensas (Burning Bush) by Lauri Ahlgren (b. 1929), Vuorisaarna (Sermon on the Mount) by Onni Oja (1909–2004) and Jeesuksen elämästä (Of the Life of Jesus Christ) by Bruno Tuukkanen (1891–1979). The older altar painting in the church is on the wall of the north aisle; it depicts Christ on the cross. It was painted by Oulu local, merchant and master builder Henrik Wacklin (1735–1802). Because of its altar painting, Oulu Cathedral could be called the Church of the Transfiguration of Christ. The altar painting, painted in 1859 by royal portraitist Robert Wilhelm Ekman (1808–1873), is a compelling depiction of the events on the mountain of the Transfiguration. Dressed in bluish and pink tones, Christ has turned his face to the heavens, and beside him are Old Testament prophets Moses and Elijah dressed in light tones. The painting also depicts three disciples Peter, James and John bowed at Christ’s feet.

In connection with the renovations in the 1900s, the church received new pieces of art: a piece titled Valo-ovi (Door of Light) at the main entrance by Reijo Hukkanen (b. 1946), an altar crucifix and mission candelabra designed by sculptor Riitta Helevä (b. 1951), and liturgical textiles designed by textile artist Airi Snellman-Hänninen (b. 1930). Veikko Törmänen (b. 1945) painted a piece titled Elämänkaari (Life Cycle) on the end of the choir. The 62-stop Romantic main organ was built by Kangasalan urkutehdas in 1938. The choir organ built by Urkurakentamo Veikko Virtanen in 1983 has 18 stops. In 1999, the church bought a cembalo built by the Swede Stig Lundmark. The church also has a piano that is available for events. The church received the status of cathedral in 1900 when the episcopal see was transferred from Kuopio to Oulu. Since then, the cathedral has been the centre of religious life in Northern Finland and an essential part of the urban landscape in Oulu. Ordinations for priests and deaconesses are performed at the cathedral.

The interior of the church has seen many changes over the years. The latest thorough renovation was carried out in 1996 and 1997 according to the design of Laatio Architects Ltd. A small crypt was added for conducting services and preparing for events. The crypt accommodates around 50 people. The church represents a neoclassical style. Straight lines, pale surfaces, marbling and gilding create a solemn and dignified atmosphere. The interior upholds the spirit of the Empire style. Nowadays, the church fits just over a thousand seats. The cathedral close is home to a military cemetery area from the Finnish Civil War. The area was designed by architect Hilding Ekelund. The memorial for the people fallen in the Civil War, titled Pro patria mortui, was revealed on 29 September 1922. The relief on the granite memorial stone was made by sculptor Wäinö Aaltonen. Oulu Cathedral and the crypt in its basement are available for church members for services (such as baptisms and weddings).